To answer these, and related questions, I have created the presentation above. It contains three main overviews, which you can see by clicking on the “tabs” on top of it:

All overviews use the same 46408 horizontal wells that started production before 2016.

Just to be sure, this presentation doesn’t show what actual US shale production will be in the future (I don’t know); as we’ve seen in the past, with abundant capital available, large increases are possible. Future production is simply unknowable. Still, by using all available production data so far, and the assumption that well behavior will not change much, I belief a reasonable estimation can be performed of what existing, producing, shale wells are going to produce. That is what this attempt is all about.

This is the first time I’ve put up this presentation, and that increases the chance somewhat that there are still some issues. If you find anything strange, please let me know.

For those interested in details, I will now explain the method I used to make these projections in some more detail.

I’ve estimated the future output of each individual well, for which I had a complete production history (= 46408 wells). The key assumption on which the method is based is that the future behavior of wells will be similar as the behavior we’ve seen in the past. As I’ve shown in the previous posts, it does strongly appear that wells behave rather similarly as past wells, especially after the initial 12-18 months on production.

For far-out months, for which very limited data exists, I’ve used terminal decline rates depending on the basin (8% for the Bakken, and 10% for other basins). Also, I used an economical cut-off of 10 bo/d for Bakken, and 6 bo/d for non-Bakken wells, after which the wells stop producing. I think that these are reasonable estimates, but will not try to defend them. Instead, by explaining in some detail the method used, I hope that you can understand the results, and allow you, based on your own knowledge and expectations, whether you want to adjust the results in some way.

Note that different estimates for these terminal decline rates, and economical cut-offs will not greatly affect the outcome, as most of the production happens in the first several years, and for this period extensive data already exists.

Some weaknesses of this method:

I will probably make further enhancements to this method, and the parameters, in the future, although I don’t expect significant differences from this result.

I’ve tried to exclude the effect of refracing, by excluding production histories after an apparent refracing event. As some of these legacy wells are likely to be refraced in the future, future production will be a little higher (a few percent).

Note that for wells for which I have accurate production data after January 2016, I’ve used that, instead of estimating it.

Gas production is completely excluded from this presentation.

On Friday afternoon I plan another update on North Dakota. 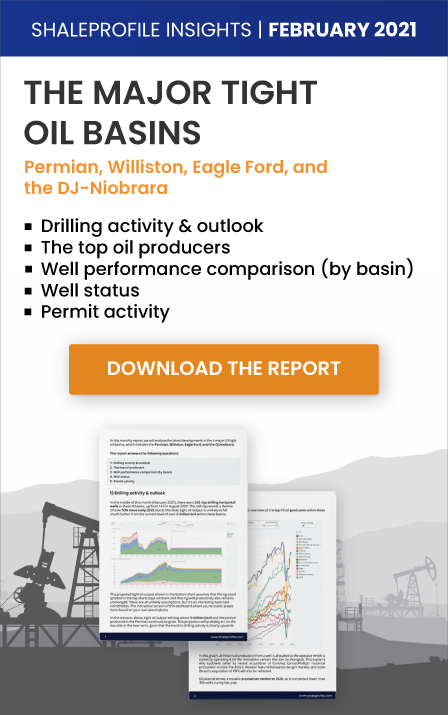